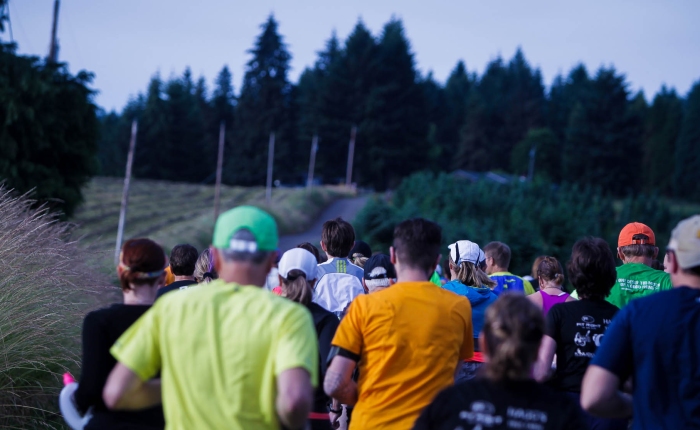 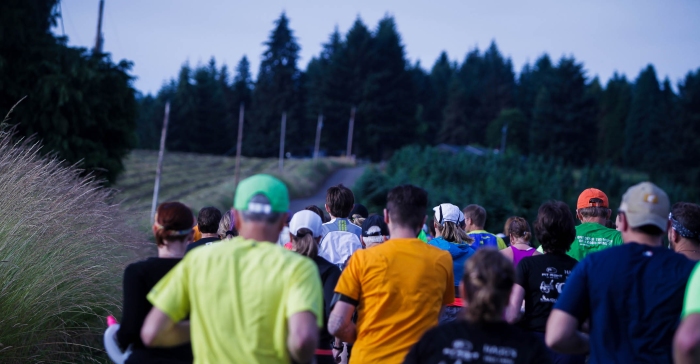 The moment I signed up for this race, it went straight to my head. And not in a good way.

The Bald Peak Half worked out well for a family trip in the area—and oh, when did I turn into the guy who says, “Dear friend, I’ll be in your locality. Perchance I’ll run a 13.1-mile race!”?—and I have to admit, I didn’t look much at the course or other details before I sent in my money.

In my defense, unlike the bigger distance races I’ve run, for this modest little event there wasn’t much detail to be found. With fewer than 300 total finishers in the previous two runnings, the data were sparse. I searched online for anyone who tracked the course, and found at least one. (Thanks, krushgrapz.) It was then my jaw hit my keyboard.

I obsessed over this “hilly half” for the next three months.

The prospect of 1,800 feet of elevation gain (not a typo)—800 in the first 2 miles and 300 in the last half-mile (also not typos)—had me looking around my flat Phoenix-area surroundings and wondering how I would ever get ready for the hills of Hillsboro.

Using MapMyRun’s Climb Ratings, I was able to look for local runs of 3-ish miles with crazy elevation gains. A trend emerged: summit hikes. Gulp. It took me weeks to work up the nerve to get out there. My trail of choice was the Quartz Ridge Trail, not too far from Piestewa Peak. I could hit it on my way to work in the morning and clean up at the office. I did it three times (4, 6 and 3 miles) in the three weeks leading up to my Oregon trip.

END_OF_DOCUMENT_TOKEN_TO_BE_REPLACED

I’m a rule follower. If you have rules or instructions or directions for me, I will adhere to them as best I can. It’s a very exciting life I lead, I know.

So when I get an email from the organizers of a race with the subject line Confirmation Sheet & Final Information or Final Race Instructions, you can bet I’m all over it like a guy who loves instructions maybe more than is healthy for him.

Last week, I got THE EMAIL for my next race. (Along with spam-levels of correspondence pertaining to upgrades and special offers and a dozen other new ways I can spend my money. But that’s a post for another day.)

The much-anticipated email contained FOUR KEY ELEMENTS that are instrumental to my race experience. END_OF_DOCUMENT_TOKEN_TO_BE_REPLACED

I finished my third full marathon two weeks ago. I set a personal record, too, with an asterisk that says *Hit wall at mile 22.5.

Since then, I’ve been thinking a lot about Roosevelt Cook.

Cook finished second in the P.F. Chang’s Rock ’n’ Roll Arizona Marathon. It wasn’t because he couldn’t quite catch up to the winner. Rather, it was his race to win. He was leading the whole thing, comfortably, and then—BAM!—he crashed (bonked, hit the wall, etc.), allowing the eventual winner to pass him around mile 23.

I had a mental picture of Cook simply slowing up, until I saw a photo of him hunched over, hand on his hip and head hanging low. Full stop. An elite marathon runner stopped on the course?!

END_OF_DOCUMENT_TOKEN_TO_BE_REPLACED

The headline of this post could be “Area Man Fails to Achieve Goal in Race.”

I completed the P.F. Chang’s Rock ’n’ Roll Arizona Half Marathon in a respectable time: 2:08:15. For my first half-marathon—or, really, for any amateur runner’s half-marathon—it’s quite an accomplishment. That will be my lasting memory.

Still, I can’t shake this twinge of disappointment. Fact is, I didn’t do what I set out to do, what I told you and everybody else I was going to do. Considering my goal was to break 2 hours, I was quite a bit off. I’m looking at two main reasons why.

1. Ready… set… oh wait! I have to pee!
I read a column that said I should drink one to two cups of water right before the starting gun goes off. I had a 16 oz. bottle with me that I drank right before the gun went off. I assume the idea was to put water in my stomach that I’d need for the race. So I drank the water. Problem is, because I was in the 16th starting group, I didn’t actually cross the start line until about 30 minutes later, which was more than enough time for the water to go through my system.

As we approached the start, group by group, I kept looking over at the portable toilets. Would I have enough time to get there and back? A quick glance at the lines and I knew my answer was no. I held it. But I was distracted. I wasn’t even a mile into the race and I dashed for the first set of porta-potties, killing probably 2 minutes. Then I spent the next couple of miles making up for the lost time, which was a mistake. I probably burned too much energy too early. Oops.

What I can do next time: Drink that water, but make sure it’s right before I start.

2. Crash at mile 10
Right after mile 10, when I should have had the finish line in my mind’s eye, I was trying to will my body to take the next step. Finally, I slowed to a walk. I made sure the walk was brief, like 15 seconds, and then started running again. Then another stop. And another, etc., etc.

My body had given up and there was nothing I could do about it. A 15-second walk here and a 30-second walk there, and I could feel my 2-hour goal quickly slipping away. I had lots of time toward the end of the race—the final 2.5 miles took FOREVER—to wonder why I hit a wall. This had never happened in 10 weeks of training that included runs of 8, 10 and 12 miles. Best I can tell, I didn’t eat well enough the day before; it doesn’t take a master’s degree in nutrition to make the connection.

The week leading up to race day I focused on modest portions of carbs and protein and turned up my nose to most sweets and anything else I thought my body wouldn’t need. Result: I lost 2.5 pounds in the six days leading up to the race.

Did trying to eat better actually cost me?

In all of my training, I never paid much attention to what I ate. Why I chose to throw out that thinking at the last minute, I’ll never know. By concentrating so hard on eating well, I’m sure I didn’t eat enough.

What I can do next time: Don’t change what’s been working during training. Or, consult a nutritionist for a prerace prescription.

So … what’s next?
My half-marathon finish has definitely got me thinking about the full marathon. Not in a “I can totally do it” way but in a “There’s no way” way. Like an aging pro athlete contemplating his retirement, I’m going to spend a few weeks talking with my family and friends and then decide what next. The Rock ’n’ Roll franchise includes some 10 races around the country. One upcoming race is in San Diego in early June, but that’s too close to my wife’s due date for comfort. I can’t possibly go gallivanting off to Southern California while she’s about to pop.

But there is a race in Los Angeles in October and in Las Vegas in December—maybe I can do the half again then. And maybe, depending on how I’m feeling and how my training is going, I can stretch for the full in Phoenix. I have until early registration closes in summer to think about it.

I had an elaborate dream the other night.

I showed up for the P.F. Chang’s Rock ’n’ Roll Arizona Half Marathon super early, then proceeded to wait in various cafeteria lines, for food I think. (Not sure why we’re all eating cafeteria food right before a big race. Someone analyze that.) I used the time to run through things I might have forgotten at home. I remembered forgetting something crucial, although now I don’t remember what.

Now that the training is done for my first half-marathon this Sunday—I have more than 175 miles under my belt—all there is to do is wait. And worry, apparently.

My trek to this race began about six years ago, when my now brother-in-law flew in from the Seattle area to run. I remember waiting for him at the finish line in the shadow of Sun Devil Stadium and feeling so inspired to run the race. I’d talk a big game year after year, then promptly forget about it until it was too late to train properly.

This year was different. Thanks in part to my more organized calendar keeping, I was sure to plug in the key dates with reminders. Early registration deadline. Training. Race day.

If I was going to do this, I was going to do it to the best of my ability. No get-up-off-the-couch-and-run for me. I hooked up with a 10-week, three-day-a-week training program by Furman University (updated link and source).  It was fantastic—and went a little something like this:

After running a couple weeks prior to my official training start, I decided I could do around 9-minute miles. Since a 9:02 pace puts me right at 2 hours for a half-marathon, I figured that was a good goal. And, based on my training, that’s totally doable, which I’m stoked about. I need to be careful, however, not to get greedy and push myself too hard and potentially burn out.

One thing I haven’t prepared for is the sea of humanity that will be racing with me. All my training has been in the quiet solitude of the streets and fields near my house. A friend told me he added a half-mile in distance at a recent half-marathon simply by “slaloming”—weaving around slower runners. I need to remind myself to be patient. Uh-oh. That may be a bigger challenge than running 13.1 miles.