November’s Bye Bye Birdie was my first stage production in almost two years, and only my second in more than six years. After Birdie, I decided I wanted to do another show, and soon. My deadline was made clearer by the fact that I have a baby due in June, when I’ll need to hang up my acting shoes for a while to play daddy.

I originally set my sights on Chicago at Theater Works. That show fit nicely into my window. Plus, c’mon, it’s Chicago. But Chicago up and got canceled. Instead of that theater’s replacement musical, I decided to go out for A Man For All Seasons, a straight play (non-musical) in the same time range put on by my “home theater”—if I have a “home theater”—Fountain Hills Community Theater.

Auditions consisted only of cold reads from the script. Basically, you show up, they hand you a couple pages from the script, send you to the stage with another actor who probably wants the same role as you, and watch you work.

I was asked to read just a couple of times. In my experience that means A) the director knows what I’m capable of and already has me slotted for a role or B) I’ve pretty much already been cut.

At the end of the night, I was thinking A, but as time went by the next day, after we were told we’d get a call, B lurked into the picture. You only get a call if they want you in the show. Like a boy who never hears from that girl for a second date, you’re left to wonder why. In fact, the cast is having its first meeting as I finish this post, so it looks like I have my final answer.

Am I disappointed? Yes. Rejection always stings. I don’t care how “over it” you say you are.

Am I OK with it? Yes. This is a new, more mature Matt’s answer. They tell you that if you’re not cast, that you shouldn’t take it personally. I used to take it personally—how could they not want ME?—but not anymore. I understand now that the director has a greater vision for the show, and for the actors who will bring it to life. The simple answer is that I didn’t fit into that vision.

Seems like I’ll slip into my acting sabbatical a little sooner than expected. I look at it this way: Instead of spending 120 hours at the theater over the next six weeks, I can have quality time with my wife as we get ready for the arrival of our first child.

I think: How am I ever going to replicate this experience?
When: The morning after we take our last bows and reduce the set to nothing.
Because: This experience was incredible. Truth is, there is no replicating it. Each show—the cast dynamic, the backstage antics, the product we put on display every night—is like a snowflake; no two will ever be the same. And I suppose that’s the way it should be. It’s a new and different experience every production, with every director, cast and crew, which makes it all the more fun. It’s part of what keeps me coming back time after time.

I think: Matt feeling sad.
When: Between one and five days after the show ends.
Because: Each show carves out a special place in my heart, and each one leaves a hole after it’s gone. Social media has helped smooth the path back to non-actor-dom. I check Facebook every hour: Has someone posted about the show?! If so, I’m sure to acknowledge with a quick “like” or a clever comment. But, little by little, Facebook activity wanes. I click through pictures and reminisce. I look through audition notices to see what show I could do next. But, eventually, it stops. Hey, maybe I’ll blog about it! That’s what I’ll do! But, sigh, even that has to come to an end. Case in point. 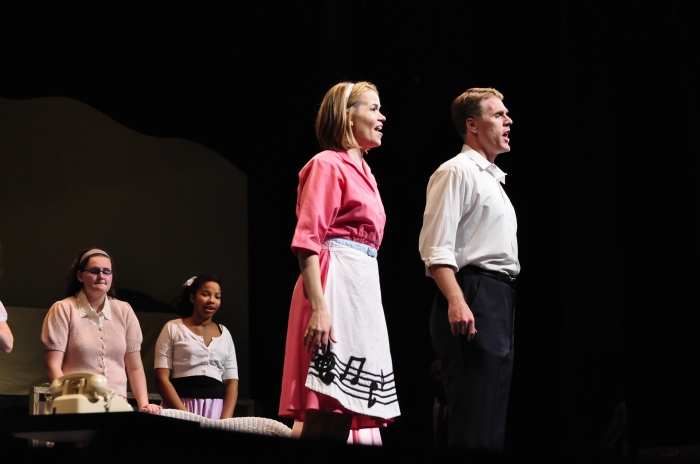 I think: Maybe I’m not cut out for this. Again.
When: The first scathing review is published. And I’m singled out.
Because: Don’t let my confident exterior fool you; I have gooey, sensitive human insides. Thankfully I also have supportive castmates to talk me down from the proverbial ledge. I know I’m doing a fine job, and from what I can tell my castmates think I’m doing a fine job, and from the laughter I can tell the audience thinks so, too. I know it’s just one person’s opinion, but unkind words in print and online still sting a little. Now what am I going to clip out to show my parents—or my kids?

I think: Wait … what?
When: I realize the show is over.
Because: By week two everything is firing on all cylinders. Actors continue to finesse their roles, ever so slightly, to get more laughter. Character interactions continue to deepen. And we’re having FUN. But the show is over, just like that, in a flash. Hard to believe, after those long months of rehearsal. 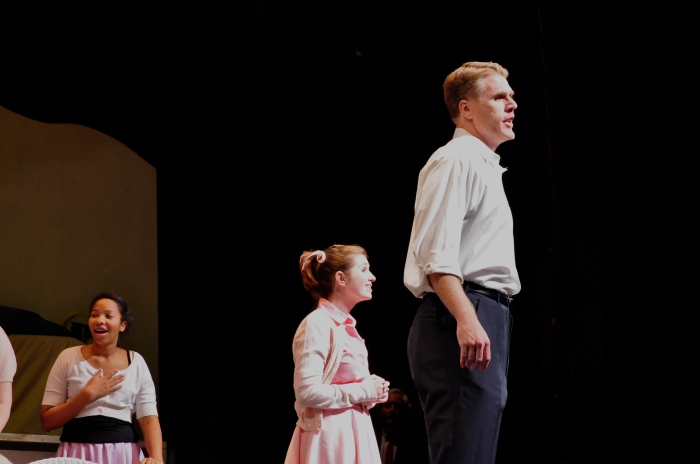 I think: Sheesh, we’re bad.
When: We finally get on stage to start tech week, the week leading up to opening night, and everything falls apart.
Because: We have our lines and choreography down pat, our timing near perfect and our entrances and exits nailed, but up till now it’s been in an empty rehearsal space. Now that we’ve moved to the theater, we introduce costumes (and costume changes), props, drapes, tables, chairs, stairs, and sound and light cues. All at once. It’s like walking and rubbing your stomach and chewing gum and juggling Ginsu knives. On an ice rink.

I think: I’m king of the world! (or whatever cheesy movie line comes to mind)
When: I get my first laugh on opening night.
Because: There is nothing in my life that is as scary or exhilarating as standing center stage, awash in lights, projecting to an audience that paid money to be entertained, and then entertaining them.

I think: Maybe I’m not cut out for this.
When: I struggle with my lines and my songs and my blocking and my choreography—that’s all—while my fellow actors are knocking it out of the park.
Because: Although I’m working my lines, blocking, etc., as best I can, it never seems to be enough. Even after I have it all memorized, I feel like a lifeless robot regurgitating from the script.

I think: I might survive this after all.
When: During rehearsal, after I have my lines memorized and my delivery gets a few laughs from castmates.
Because: I’m becoming comfortable with the material and my peers seem to approve. Plus, the show is coming together and we all start to see how much fun it could be. 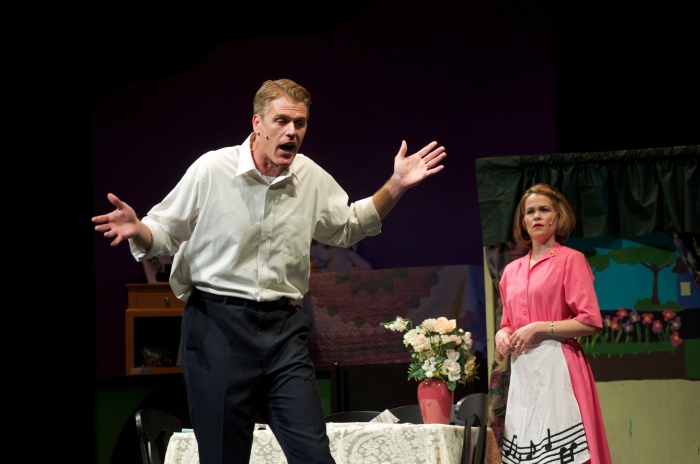 I think: I wonder what my wife looks like.
When: Every day.
Because: I see her literally for five minutes a day, sometimes less. On those “less” days, I crawl into bed long after she’s fallen asleep, and in the morning she wakes me with a kiss before heading out the door. I would be remiss if I didn’t say how wonderful my wife is. She understands how much acting means to me. She may not like the long hours away (neither do I), yet she supports me all the same. Love you, Hon! 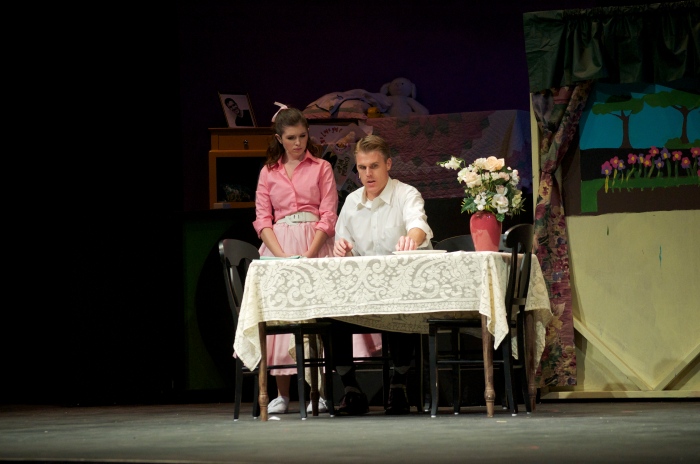 I think: They like me! They really like me!
When: I’m cast in the show! Extra bonus for it being the part I wanted.
Because: Validation. The director et al. think I have what it takes to make the show a success. The director calls to offer me the part. I usually ask for a day to think about it before accepting, but really, my mind is already made up by the time I put the phone down.

I think: How am I ever going to find time to do this?
When: I plug the rehearsal schedule into my calendar.
Because: A community theater production requires an insane amount of rehearsal time. We’re talking up to four to five hours a day, five days a week, for two months or more. It’s like a seasonal part-time job. Check that; it IS a part-time job, except without the paycheck. 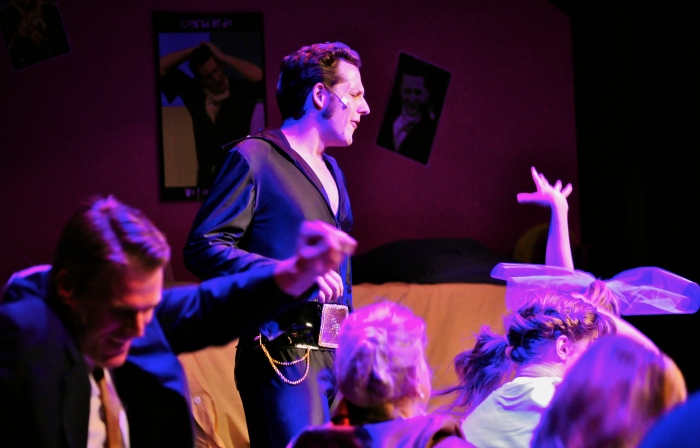 I just finished a run of Bye Bye Birdie at Desert Foothills Theater, and I’m settling in to the relative normalcy (Thanksgiving notwithstanding) that was my life before I accepted the role. It’s got me thinking about what a roller-coaster ride it’s been. We tend to use “roller coaster” to describe the ups and downs of an experience, but this acting action adventure had screaming and blood pumping and adrenaline surging to boot. It always does. And the people you’re in the car with, well, they form a bond with you that’s difficult to replicate. That’s one of the many reasons I love performing on stage.

I think: Hmm. Should I? Could I? I’m really busy.
When: I see an audition notice for a show that sounds interesting.
Because: It’s been a while since I’ve done a show. (Almost two years this last time.) I hear and read about all the wonderful things my acting friends have been doing, and deep down I miss it. It doesn’t help that people ask, “So, are you doing any shows lately?” and I have to spin some yarn about how I’m taking a break and blah, blah, blah. I feel so out of touch. I miss stretching my brain and my boundaries to learn new roles. I miss the quirkiness of rehearsals. The camaraderie of actors. The buzz of backstage. The unparalleled thrill of being on stage. But I just don’t have time. Still, I put a feeler out to some friends who know more about the show than I do and get their advice. “Go for it!” they say, not surprisingly. I have good friends.

I think: Omigosh omigosh omigosh I’m gonna die.
When: I finally decide to audition.
Because: Auditioning is one of the single scariest things on Earth. Even seasoned actors I know feel this way. I realize I need to brush up on the monologue and song that I’ll present to the director and whoever else’s smiling face is on that side of the table. I hope what I’m doing is what the director is looking for. If I’m lucky, I stumble through some cold reads from the script. I make a mental note to take a class to start improving this for next time. 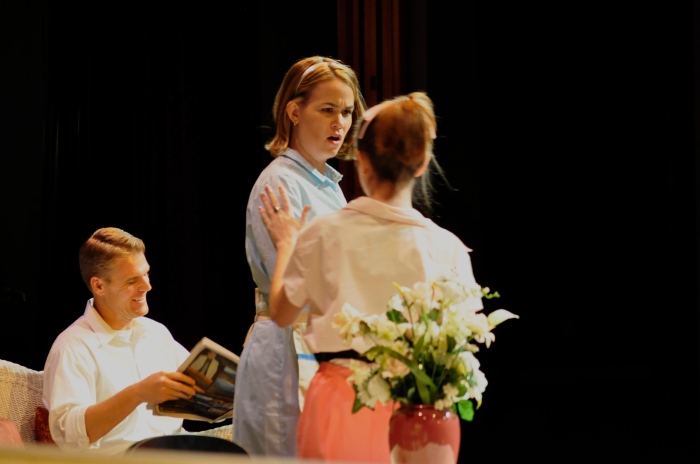 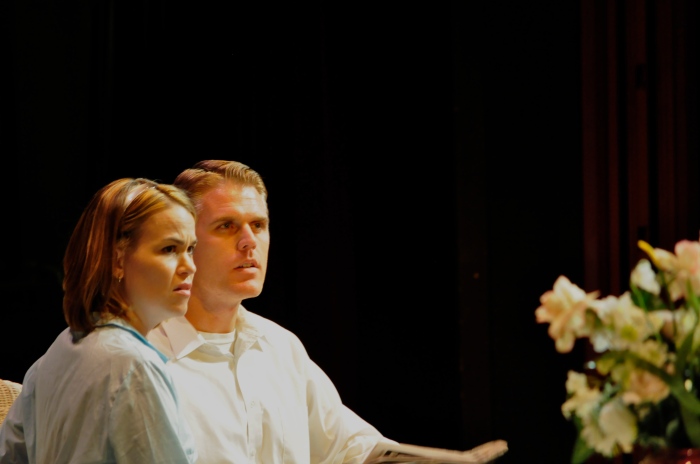